View source
Welcome To The Wiki

This is a wiki aimed to give information about everything related to the Rokudenashi Blues manga. This is a wiki where everyone can help out by adding and editing articles! The wiki has now a number of 665 edits, and currently editing over 62 articles and still expanding, since March 6, 2014.

Characters
Brief Summary of The Series

Rokudenashi Blues is a manga series written and illustrated by Masanori Morita which was published in Weekly Shōnen Jump from 1988 to 1997, having a total of 42 volumes. Maeda is a new student at Teiken High. He stutters when he's nervous and he's rather clumsy. He gets noted immediately because he hits a teacher during the entrance ceremony. Some clubs search to enlist him, as they see in him a force they can use to get even with other clubs. But Maeda is a loner and has only one dream: becoming boxing champion. His first objective is to beat the leader of the boxing club. "Rokudenashi" translates as "good for nothing". 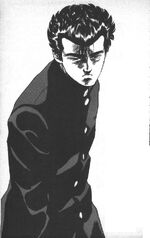 Taison Maeda is the main character of the story, he's a famous delinquent from Teiken High, in the Kichijoji area of Musashino, Tokyo, known for his passion of Boxing, street fighting, and his moped, Chavez. Albeit being a delinquent, being easily angered and stupid at times (He punched a professor when he heard the girl's uniform changed), he has a sense of honor and respect, and values his friends greatly. Taison is also known as one of the Tokyo's elite 4s, or "Heavenly Kings", and aims to become the world champion in boxing. Taison has an interest for Chiaki Nanase. His name is based on wrestler Akira Maeda and former world heavyweight champion Mike Tyson. He lives with his brother in the Honky Tonk apartment complex. Him and his older brother both left the south of Japan for Tokyo to avoid inheriting their father's profession, that of a monk. He is a lightweight when it comes to drinking and always breaks down into tears.

To make a new article, just enter the article title in the box below.

Not sure where to start?